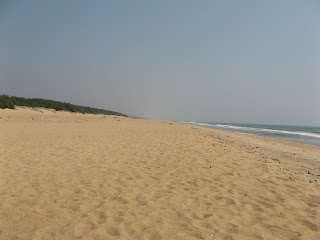 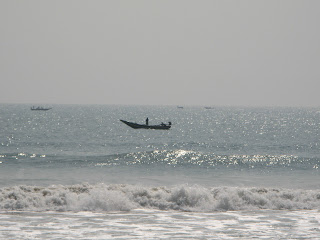 We spent the morning on the beach.  What a fantastic beach it was too.  Deserted golden sand as far as the eye could see in both directions.  We had a bit of a paddle but the waves were a little too ferocious for swimming.  All too soon it was time to return to the hotel which is a 5 minute drive away through the protected forest that is home to deer.  We didn’t actually see any wild deer just evidence that they had “been” there.
Later that afternoon we visited the Tours and Travels man.  We were just planning to get the car to drive us into town but he talked us into visiting Dolphin Island and seeing the largest lake in India.

Spent more time mooching around and watching telly till dinner time.
Went down to dinner and the restaurant was deserted, this was due to the wedding that all the American Gujeratis were attending.  We ordered our drinks and set off for the buffet.  It was quite disappointing, many of the tureens were empty; there were no meat dishes and no bread.  When we sat down to eat we were even more disappointed as the food was all ice cold.  After a few mouthfuls each we gave up.  Cold cauliflower is pretty awful.  Our drinks still hadn’t arrived.  I called the waiter and asked for our drinks and he asked us if everything was ok to which we both replied no, the food is cold.
He dashed off and ten minutes later returned with our drinks and the bill.  Will wrote on the bill about the lack of dishes and food being inedible due to it being cold. Another waiter appeared who asked if we wanted something else.  Will was not a happy bunny and said no thanks and that we just wanted to go back to our room.
Back in the room I cracked out a packet of biscuits and we started playing cards.  After 10 mins the doorbell rang and it was the chief chef who apologised and wanted to have another chance to cook us something.  Will said no thanks and sent him away.
Another 20 mins passed and half a packet of biscuits and the doorbell rang again.  This time it was the Restaurant manager and two waiters, they had brought us a meal.  He was very apologetic and wanted us to please eat something.  They had cooked us the most expensive dishes on the menu; a prawn dish, chicken curry, rice with fruit and cashews and some garlic nan bread.  They dished it up and all stood watching to make sure we were going to eat it.  When they were happy we were munching they left us to it.
The dishes were all great tasting and hot too.  We were quite pleased to get a dinner as we had eaten something at lunchtime that had disagreed with both of us and we were looking forward to having a good meal to get rid of the acid stomach.
Dinner in your room at 10.30 is pretty special I can tell you!
Posted by Lin2.net at Saturday, December 18, 2010