Our guide picked us up shortly after breakfast for a tour of the temples. We saw four temples that were pretty special.  The monk who was in charge of one of them was not impressed that I put money in the donation box rather than give it to him.  He told me that box was for God and asked what about me!
Will got fleeced by a couple of locals when we were looking at a spectacular temple from an observation point.  They came up with their donation book and were quite disgusted when Will only gave them 20 rupees as that was all he had.  The guide had just told us that the government pay for the upkeep of the temple so when the boys asked me for money I just told them no.  Will had obviously dropped off to sleep whilst the guide was saying that bit. 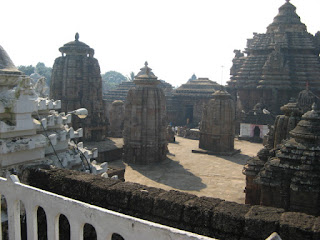 The guide was quite knowledgeable but he sounded as if he was just regurgitating facts and he had a really boring way of doing so.  It got to the stage that we were walking away from him when he started talking in order to stay awake.  We are sure he will make a good guide one day when he learns to relax and just talk rather than just reciting information.
We were returned to the hotel for lunch.  There were five restaurants/bars in the hotel.  One of them being Mirch Masala, my fav restaurant in the UK.  We decided to save that for dinner rather than lunch and went to “Bling it On”.  We ordered a basic pizza and some soup and bread.  Will’s soup (instant packet) turned up after 35 mins and my pizza eventually turned up after 45 mins.  We seriously considered returning to the room and calling Dominos, they are pretty big over here.
After lunch we resumed our tour and went to a temple with rooms cut into bare rock with some exquisite carvings.  There were wires everywhere covered in fibre glass with big speaker boxes dotted round.  Our guide advised that this was for a sound and light show but it never worked.  That was the first thing he said that actually made us laugh.
Back at the hotel for a wash and brush up before dinner in Mirch Masala.  Boy was I disappointed.  The menu was good but again the service was so slowwww.  We waited about 35 mins to get our drinks.  We have come to the conclusion that drinks must be considered as a pudding or something that you have when you have almost finished your meal over here because it happens everywhere.  We have taken to carrying our own bottle of water to tide us over until our order arrives.
Posted by Lin2.net at Saturday, December 18, 2010