Calcutta station was mad with hundreds of people milling round, many of them staring at us.  I decided that when people were staring I would say hello to them.  A good plan in theory.  However, in practise nigh on impossible to say hello so many times.
Arrived at the Hotel Lytton in the heart of Calcutta and were wowed by the décor.  Stained and hand made glass everywhere in striking patterns. We were even more impressed when we saw our spotlessly clean room that was massive and housed a table and chairs, pull out sofa with coffee table and a huge bed.  After a quick shower and change of clothes we went in search of food as we hadn’t eaten for about 20 hours.
Stumbled across a small veg restaurant and had a thali that was different to the ones we had previously but still just as tasty.  Mooched around the streets for a while getting our bearings and of course attracting the stares before we went to the Indian Museum, the largest in Asia.  The natural history section was good but could have been better if the exhibits were cleaned.  I think the museum was opened in 1950 and didn’t look as if it had been cleaned since.  Some of the statues from the 10th century were stunning in their detail.
We started to look around the geological department, I love looking at rocks but was sadly disappointed.  Some of the cases were so dusty that you could not see the exhibits inside.  We did laugh when we saw the albino tiger that was so dirty and dusty that he was yellowy brown in colour.
Walked around for a while and managed to attract a shopkeeper who was almost on par for persistence as the rickshaw driver from the previous day.  We retreated to the hotel for a drink to shake him off.
There was a chap in the bar boasting to the barman that he had 17 cars and then thought he should tell us that he has been to Australia.  We acted suitably impressed before beating a retreat to our room.  Had a bit of a nap and watched some tv before showering and going in search of food. 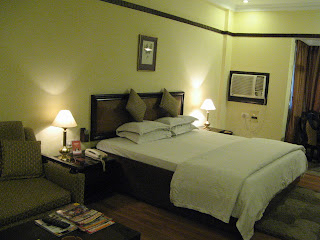 Found a great restaurant full of locals and had a great meal for about £2.00 each.  Walked around the streets and attracted yet another shopkeeper who was keen to tell us that his grandfather was in the British Army and his mother who was 115 got 400 rupees per month from the British Government and did we want to buy pashminas, shawls or scarves.  We walked off most of our dinner and came back to the hotel and said goodnight to our new friend.  I am sure he will be waiting for us in the morning and by now the rickshaw driver from Varanasi will be here.
We have a full day sightseeing tomorrow.
Posted by Lin2.net at Saturday, December 18, 2010