After breakfast we went to the tours and travel manager’s office and met our guide/driver for the day, a chap with the good Indian name of Peter.
Peter drove us through Puri town centre and we were singularly unimpressed.  Ok so the road was about 10 lanes wide but there was not much there of any note.  There seemed to be an abundance of banks but not many shops.  The market as far as we could see consisted of people sitting with a sheet on the floor with vegetables on it.  The cows were everywhere, fat, happy looking cows they were too.
The road was one of the best we have been on in India and took us through many small agricultural towns and rice paddies. The lake was massive, lots of it being used for farming.  There were little islands everywhere and it was quite funny to see a cow on an island that was little bigger than it was.  Only when they left the island and were only ankle deep did it make sense.
We arrived at the tourist centre and chartered our boat for two and a half hours to take us to see the river mouth and the wild dolphins.  Our skipper was joined by his son and they took turns steering the boat.  Whomever was driving got to wear the shared baseball cap.  Will gave the boy his cap and after a little adjustment he seemed pleased as punch. 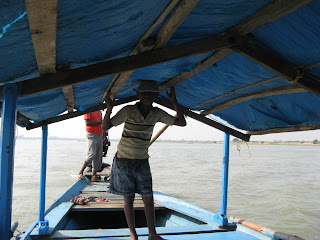 We passed villages, fishermen and lots of other boats.  One boat pulled along side and matched our speed to allow a chap to jump aboard with a washing up bowl of what we thought was seafood.  It turned out he was offering us oysters.  He broke one open and showed us the pearl.  Will and I were both wondering how he was going to cook the seafood until the pearl appeared . .  doh!
We arrived at the dolphin area and sat and watched.  We were lucky enough to see a dolphins or at least bits of dolphin.  They don’t jump out of the water like those you see in a dolphinarium but they do come up for air.  We saw quite a few but were never fast enough to get any pictures. 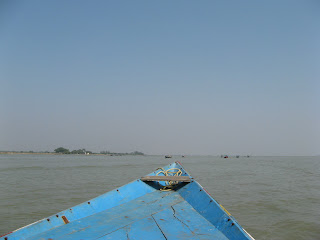 After a brief stop at the river mouth where we were once again offered pearls at extortionate prices and cold beer we returned to the tourist area.  We asked Peter if the food was good and he said no, it was dirty but he would take us somewhere clean.  The restaurant owner greeted us with a large crab and told us it was special before giving us the menu.  Will ordered crab thali and I ordered boiled egg thali.  The owner kept telling Will that it wasn’t special and was pointing to other items on the menu that were special.  Eventually he gave up pushing the special and went away with our order.
Will thoroughly enjoyed his crab.  I enjoyed most of my egg except the bit that bounced off the spoon, hit me in the guts and rolled down my front leaving a nice tumeric stain as it went.  I know I an a messy eater generally but in my defence I was only given a metal spoon to eat with and I use the term metal loosely.  It would be far more descriptive to say my spoon was made of tin foil.  You try cutting a hard boiled egg with tin foil and you see how good you are!
On the way back to the hotel both of us were dozing off in the car.  Not too sure if it was the hum of the diesel engine or the calming influence of the lake but we both felt tired.
Dinner in the hotel that evening was most amusing, waiters were rushing round like crazy showing us the vast array of dishes available.  We were a little peeved when we discovered that there was no bread again but sat down to eat.  The drinks arrived quickly and then the head waiter came out with a basket of freshly cooked bread just for us.  It was garlic nan bread that was burning hot and very nice.  We were pestered by it seemed half of the restaurant staff asking if everything was ok.  10/10 for effort.
Posted by Lin2.net at Saturday, December 18, 2010