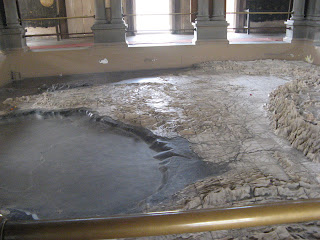 You know what happens when you really need to get to sleep early, bing! You are wide awake.  Will and I read for ages before finally settling down for the night, only to wake up a couple of hours later at 2am and again be wide awake.  Anyway, we still managed to get out of bed and do the dawn trip.  It was pretty chilly but the faithful were bathing, some were even swimming.  One chap was singing and swimming, we were impressed.
We walked a little round the old town of Varanasi with its narrow winding alleys dodging cows, goats, mopeds and of course cow pats.  We saw the outside of the Kashi Vishwanath temple (golden temple) with its intricate carvings but were only allowed to peek through the doors at the internal splendour as we were non Hindus.  Close by is a famous mosque.  Security getting in the area was very tight, we were not allowed to carry anything in with us, were scanned and frisked.  They were either very thorough or just wanted to cop a feel of the fat white man’s family jewels.
The difference in the amount of people on the street from the previous night was startling, you could walk at least ten paces before someone tried to sell you postcards, bindhis, henna or some awful trinket whereas the previous night you had to contend with one person either side of you constantly.
We had some masala tea in the old town area and actually bought some masala spices to make our own when we get home.  The shopkeeper assured us that the mixture was made by his 94 year old grandmother.  We were going to buy a wooden carving of Lord Ganesh but he tried to rip us off by quoting a ridiculously high starting price.   He tried to haggle a little but we walked away as we do not like to do business with people who are deliberately trying to rip off tourists.  A little profit is fine but blatant overcharging is wrong.
Back to the hotel for some breakfast and a nap before our afternoon excursion to see even more temples.  The most interesting one was called MotherIndia temple and was dedicated to the Indian nation.  Housed in it was a relief map of India and some of Indo-China made entirely of marble and perfectly to scale.  It took six years to make and the effect is breathtaking being able to see the Himalayas in contrast to the plans.
The guide discovered the previous evening that we had not tried South Indian food so he took us to a restaurant for lunch where we had Dosa, a very thin bread that was rolled into a tube about 18 inches wide.  With it came chutney, dal and a vegetable dish.  We were impressed and will be looking for Dosa again.
The rest of the day was spent lazing about before eating in the hotel due to the fact that there were no restaurants within walking distance. Before diner we heard a big bang and didn’t think too much of it as it is wedding season here and fireworks go off all the time.  Given the choice we would rather have eaten anywhere than in the hotel.  The prices were extortionate, probably because they know they are the only place to eat and drink locally. The only saving grace is that the restaurant staff are friendly and the food it pretty good.
Posted by Lin2.net at Saturday, December 18, 2010