After a leisurely breakfast we went out walking we bought a foot scraper and I got a watch.  Stopped in a bar for a drink and had some nibbles and returned to the hotel to cool down. 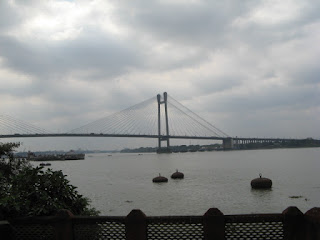 After a short rest we went out again looking for lunch and ended up in a Spicy Fried Chicken restaurant.  The waiter was disappointed that we didn’t want chicken.  We ate our noodles and veg pakora returned to the hotel to pack.
We were collected early for our drive to the airport and it seems we got there in record time.  I didn’t have a last cigarette outside the airport and severely regretted that as there was no smoking room.  Calcutta domestic airport is a disaster.  There are not enough seats, hardly anywhere to buy food, nothing to do and no information is given.  Our flight was delayed eventually by two hours.  The plane was so hot that even the locals were complaining to the stewardesses that they were being cooked.  We sat on the tarmac gradually getting hotter and hotter and after 20 mins the captain announced that there was a technical problem and that paperwork had to be completed.
He advised us that the flight would take exactly one hour wheels up to wheels down.  He lied it was almost an hour and 20 mins.  I was grumpy beyond belief when we landed due to the lack of nicotine for 5 and a half hours.  We were met by our guide and driver who tried to put a garland round my neck.  I thought he was just another local trying to get money from me so I growled at him and dodged the garland whilst sparking up.
I noticed that Will had the garland so on the driver’s second attempt I let him put one round my neck.  It was icy cold and smelled fantastic.  We walked across the car park and the car was loaded with our luggage but I was going to finish my ciggy before going anywhere so everyone waited just for me.
It was a short ride to the hotel The New Marrion which is on the main road. Another spotlessly clean hotel with a massive room with dish tv.  We even have our own covered balcony with sofa, chairs and even a rocking chair.
Due to the late hour we ordered a room service meal and retired to bed.
Posted by Lin2.net at Saturday, December 18, 2010