Not looking forward to the early check out today.  The Toshali Sands check out time is 8am.  This is apparently because most people leave by train and all of the trains leave early morning.
We managed to extend our check out till 11am so after a leisurely breakfast we mooched around the hotel, sat in the gardens and admired the buffet that was being set up for the Welders Designers Corporation of India who were holding their 37th annual conference there. 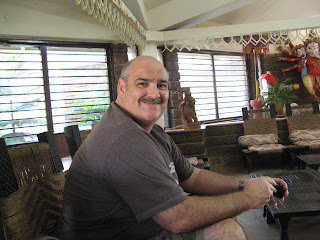 There are lots of crows, some of them are massive, they were intimidating the staff by gathering in great numbers close to the food and squawking wildly.  After a while we tired of the noise and withdrew to the room to pack.  That killed two minutes so we sat and waited watching Footloose on the TV.  English channels here are limited to two and believe it or not Footloose was the best option.
After checking out we walked to the local Coffee shop and had some lunch.  We were not getting picked up until 3pm.  After lunch we returned to the hotel and sat in reception watching as busloads of people arrived.  Mainly men, who all spoke really loudly despite only being a foot away from the person they were talking to.  We could only speculate that this was due to the fact they were welders and worked in very noisy environments.
The guide and driver arrived just as I was having a last ciggy so of course everyone had to wait for me again.  We were driving back to Bhubaneswar airport where we would catch a flight back to Delhi.  We were pleased to note that the airport here wasn’t the same shambles as Kolkata.  There was plenty of chairs and a very nice restaurant.
With a little forward thinking we ordered some veg pakora which we had intended to stick in a bag and eat when we arrived in Delhi as we were sure it would be very late.  In our experience all internal flights in are always delayed. The waiter asked if we wanted them packaged and put them in a nice foil tray with napkins.
There was a smoking area in the restaurant so I of course took advantage of this before we left to go through security.  It was all remarkably painless and we were astounded when the flight actually left on time.
Our driver seemed a bit confused as to where the hotel was located.  It is a bit like a rabbit warren in that area with narrow roads, cars parked everywhere and cars tooting each other to reverse into a gap so that they can pass.  Luckily Will and I recognised the main road and were able to direct the driver to the narrow street where our hotel was.  The driver had a most bemused look when we started directing him and was almost incredulous that we got him to the right street.
It was still pretty late when we arrived at the Clark International Hotel in the Karol Bagh area so we ate our pakora with some freshly brewed tea.  Yum!!
Posted by Lin2.net at Monday, December 20, 2010