Met our guide at 9.30 who asked about our itinerary.  He noticed that the zoological gardens were on it and asked if we really wanted to see sick animals.  He said he would take us some other places instead. 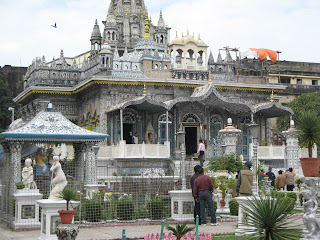 Our first port of call was a Jain temple the guide described as kitch.  The chap who build it was very rich and very well travelled.  Sadly it did not bestow good taste on him as the temple was a mish-mash of so many styles but visually it was stunning with the mirrors, mosaics and inlaid semi-precious stones.
Next stop was the coffee house, famous for being the birthplace of the Indian Revolution.  Everywhere here in India is now no smoking.  There are signs in the coffee house saying no smoking but the intellectuals say that they must have coffee and be able to smoke so a blind eye is turned.
A visit to Mother Theresa’s Mission followed where we saw personal items and were told the story of this amazing woman from Macedonia who dedicated her life to the homeless of Calcutta and to hundreds of other very poor areas around the world.  Thankfully poverty on that scale is no longer present in Calcutta due to government intervention. 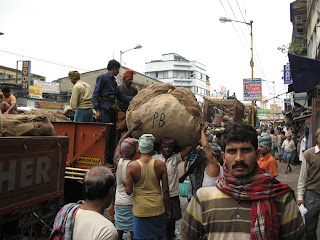 Our guide told us that Calcutta is the cultural centre of India and that it is traditional to give the gift of a flower and a book.  We visited the book market, we have never seen so many books in one place.  There was something like 3,500 bookshops, stalls and even street vendors selling books of all sorts from technical manuals to British and American classics with everything imaginable in between.
We visited the wholesale market, one of the few remaining in India where the carrying is all done by hand.  We saw four men carrying a sack on their heads that must have weighed about a tonne.  There were hundreds of other people carrying smaller sacks on their heads and people selling all manner of fruit, veg and spices.  I thought the smells were fantastic.  Will assures me that there was the pungent odour of rotting veg everywhere but luckily I could only smell the nice things.
We drove round the centre of Old Calcutta and saw some fantastic buildings.  Unfortunately you have to photograph from the car as no parking is allowed except for government officials.  After a visit to the Victoria Memorial which is a stunning marble building with a dome not unlike St. Paul’s Cathedral in London we returned to the hotel.
Our guide was very entertaining and very knowledgeable.  He writes articles for newspapers, academic papers, department of linguistics and many others.  He had a lovely story telling voice and was so well spoken Will and I were almost putting on our telephone voices.
We would have loved to talk to him all night he had us in stitches, not just his jokes but the fact that his favourite place in the UK is Folkestone.  He has been to the UK 17 times and always likes to spend at least two days there to unwind and relax.
We made our way back to the hotel and had a rest before going out in search of dinner.  Search being the operative word.  We had heard that Park Street was the place to eat and drink.  It was only a short walk from the hotel so off we set.  We gaily walked along Park Street then, I have no idea how we did it, but we managed to get lost.  We ended up walking for over an hour in what was quite a warm evening before finally doing a complete circle and ending up back on Park Street.
We picked a restaurant that looked busy and sat down, wiping the exertion from our brows as we did so.  The waiters made a fuss of us and left us with the menu.  They asked several times if we were ready to order but we weren’t, the menu was extensive and we couldn’t make up our minds.
When we eventually placed our order the waiter asked if we knew what we had ordered to which we replied yes.  He obviously didn’t believe us so decided to test us.  “What is alu matter?”  “potato and peas”. “What is chana?”  “Chick peas”  “Hrummpph, you must speak Hindi” and off he trotted.  The food was good but not as good as the canteen the previous night and it was three times the price too.
Back at the hotel we asked if we could extend our room and were told no problem, what time would you like to check out?  A big change from the previous hotel.  We both loved Calcutta and want to return.  If we do, we definitely want to stay at the hotel Lytton again.
Posted by Lin2.net at Saturday, December 18, 2010